“TMJ” stands for temporomandibular joint, or the jaw joint. In fact, there are really two TMJs, one in front of each ear. The TMJ is the joint formed by the temporal bone of the skull (temporo) with the lower jaw or mandible (mandibular). These joints move each time we chew, talk or swallow. Unlike the shoulder or knee, which are ball-and-socket joints, the TMJ is a sliding joint. The sliding allows for pressure placed on the joint to be distributed throughout the joint and not just in one area. Adding to the joint’s complexity is that between the two bones that make up the TMJ (the temporo and mandibular) is a disc, just like those between the bones on your back. Made primarily of cartilage, in the TMJ the disc acts like a third bone. Because it is attached to a muscle, the disc actually moves with certain movements of the TMJ. 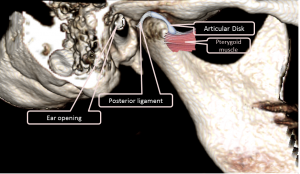 One of the difficulties with diagnosing a TMJ disorder is identifying the exact source of the problem. For example, the nerve to the TMJ is a branch of the trigeminal nerve. An injury to this nerve in the TMJ may be confused with neuralgia because the symptoms appear to be the same. The two bones of the TMJ are held together by a series of ligaments, any of which can be damaged. A damaged TMJ ligament usually results in a dislocation of the disc, the lower jaw, or both. Another possible problem may be from muscles that are connected to the bone. A muscle injury may produce pain in the TMJ or abnormal movement of the lower jaw. Careful diagnostic study and testing is needed to determine the precise source of any TMJ problem.

A TMJ disorder is simply a disruption in the action of the jaw, usually accompanied by pain. There are a number of conditions affecting the function of the jaw that can cause one of these disorders. Fortunately, because the jaw is made up of bone and other living tissue, it is alive, making it capable of repair and healing.Any malfunction prevents the complex system of muscles, bones and joints working together in harmony. The result is a TMJ disorder – also known as TMD or CMD (cranio-mandibular dysfunction). Generally, a malfunction of one or both of these jaw joints is caused by trauma, whiplash, bad bite (malocclusion), poor posture, teeth grinding or skeletal malformation. It is estimated that one in every four people suffer from TMJ symptoms